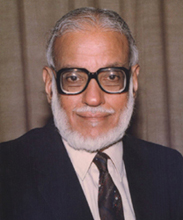 Prof. M G K Menon was a world renowned physicist and policy maker. He had a prominent role in the development of science and technology in India and one of his most important contributions was nurturing the Tata Institute of Fundamental Research, Mumbai, Prof. Menon took his Ph.D. from the University of Bristol, UK in 1953, He has a large number of honorary doctorates from universities in India and abroad. Prof. Menon was a Fellow of all the three Science Academies in India; and has been President of each one of them. Prof. Menon had carried out Scientific Work in Cosmic Rays, Particle Physics. Distinguished for investigations in the field of cosmic ray studies and in particular on the high-energy inter-actions of elementary particles, he took over as Chairman, ISRO for a brief period after the untimely demise of Dr. Vikram Sarabhai in 1971 .

Fellow of all the three Science Academies in Ind

Honorary Fellow of The Institute of Physics UK (1997)

A Founding Fellow of the Third World Academy of Sciences.

Distinguished for investigations in the field of cosmic ray studies and in particular on the high-energy inter-actions of elementary particles.

President of all the three Science Academies in India

Secretary to the Government of India for 12 years (Electronics, Science and Technology, Defence Research, Environment) (1971-1982)

Honorary Member of the Institution of Electrical and Electronics Engineers

Member of the Pontifical Academy of Sciences, Rome (1981)

Chairman of the Science Advisory Committee to the Cabinet (1982-1985)

President of the International Council of Scientific Unions (1988-93)

Minister for Science & Technology, as also for Education in the Government of India