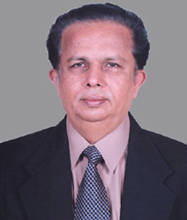 Dr G Madhavan Nair was born on October 31,1943 in Thiruvananthapuram, Kerala. He graduated in Engineering from Kerala University in 1966 and underwent training at Bhabha Atomic Research Center (BARC), Bombay. He joined Thumba Equatorial Rocket Launching Station (TERLS) in 1967. Since then, he has held various positions posting illustrious milestones on his way to the position of Chairman ISRO. During his tenure of six years as Chairman, ISRO/Secretary, DOS, 25 successful missions were accomplished. He had taken initiatives towards development of futuristic technologies to enhance the space systems capabilities as well as to reduce the cost of access to space. He had given major thrust for evolving application programmes such as tele-education and telemedicine for meeting the needs of society at large. He has initiated schemes for Village Resource Centres through satellite connectivity which was aimed at improving the quality of life of the poor people in the villages. In his tenure as the Director of the Liquid Propulsion Systems Centre from 1995-99, India's efforts towards indigenous development of cryogenic technology took concrete shape and vital infrastructures were built and critical technologies were developed. In his role as the Director of VSSC from 1999 till 2003 G.Madhavan Nair led VSSC, towards the development of India's Geo-synchronous Satellite Launch Vehicle - GSLV, which had its successful flight in the very first attempt,. He was also responsible for charting the road map for future development of ISRO's activities, especially in the launch vehicle area targeting low cost access to space. Dr G Madhavan Nair had led the Indian delegations for bilateral cooperation and negotiations with many Space Agencies and Countries, specially with France, Russia, Brazil, Israel, etc.. Dr G Madhavan Nair has led the Indian delegation to the S&T Sub-Committee of United Nations Committee on Peaceful Uses of Outer Space (UN-COPUOS) since 1998.

D.Sc from Cochin University of Science and Technology, Kochi (2006).

Honoris Causa from University of Mysore ( 2006).

Honorary Degree of D.Sc of the University of Kerala, Kerala (2007).

Honorary Fellow of The Aeronautical Society of India (2007).

"Bhu Ratna" Award from the Soil Conservation Society of India at the National Conference on "Challenges and Opportunities of Bioindustrial Watershed Development for the Prosperity of the Farming Community" at the University of Agricultural Sciences, GKVK Campus, Bangalore (June 25, 2009).

"Bhu Ratna" Award from the Soil Conservation Society of India at the National Conference on "Challenges and Opportunities of Bioindustrial Watershed Development for the Prosperity of the Farming Community" at the University of Agricultural Sciences, GKVK Campus, Bangalore (June 25, 2009).

"Chanakya" Award in the area of Technology Innovative Leadership from Public Relations Council of India at Bangalore (April 3, 2009).

Gold Medal from the Prime Minister at the 94th Indian Science Congress at Chidambaram (2007).

Honoured by the Lakshmikanthammal Educational Trust for outstanding contribution to the field of Indian Space Research at RMK Engineering College, Thiruvallur (2006).

"Best R&D Man of the Year" Corporate Excellence Award - 2005 from the Foundation of Indian Industry & Economists at ND.(2006).

Personality of the Decade Award from KG Foundation, Coimbatore (2004).